Home » Blog » Winter Science Experiments: How Much Water is in Snow?

Winter is the perfect time for some simple science experiments — find out how much water is in snow!

My family will tell you that I’m an amateur weather buff — I like to observe what Mother Nature dishes out to us.

While watching the Weather Channel one morning, the forecaster was talking about the rain/snow ratio — basically 1 inch of rain would be equivalent to 13 inches of snow.

Kids in preschool, elementary, middle school and even high school will really enjoy it and it only 2 minutes to set-up with some GREAT results!  I’m including detailed directions so you can replicate this at home or in a classroom along with affiliate links to items that we used during our experiment.

All you’ll need for this experiment is:

** Note:  since we’re putting cold snow into a glass jar, there will be some condensation on the outside of the jar during the experiment — so you may want to place the jar on a towel or a surface that can get wet.

If you’re looking for a good book to go with this experiment (we always recommend connecting science & reading!), try one of these great non-fiction books:

— a fabulous book about all things snow!  Kids will enjoy learning about crystalization, the types of snowflakes that form, the science behind snow and more!

The Story of Snow: The Science of Winter’s Wonder

— this nonfiction book reads more like a story which is perfect for younger kids.  Illustrations show the process of water varpor becoming snow crystals and the book includes details about how to catch & observe your own snowflakes too!

The Snowflake: A Water Cycle Story — is also a wonderful book if your kids are learning about the the water cycle.  The author follows the journey of a single water drop throughout the year showing how it may become part of a cloud, flow into the ocean or turn into a snow crystal. 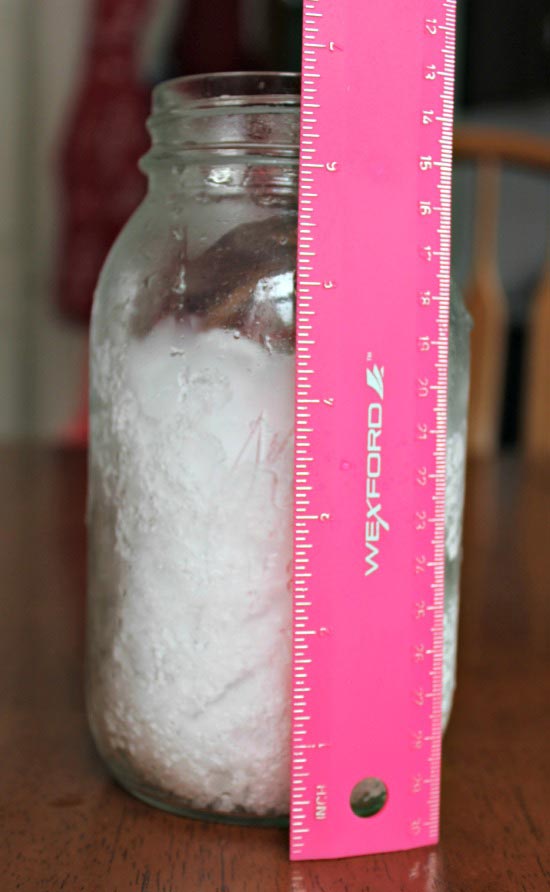 This may be difficult as your glass jar will be super cold & wet so the marker may not work right away.If you have a problem with the marker not writing, try adding a rubber band around the jar to mark your start line.

Then use the ruler to measure the height of the snow in your jar. We measured 4.25 inches of snow in our jar. 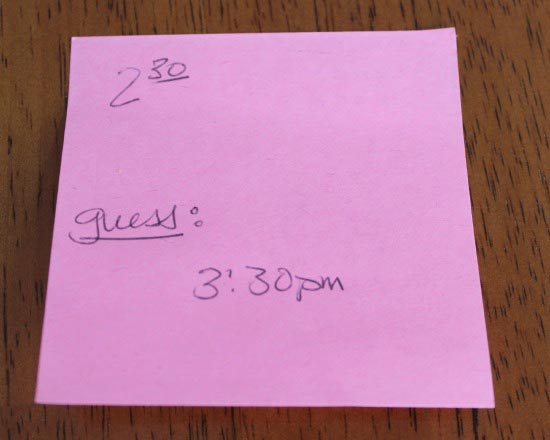 With this activity, kids will learn how scientists make “educated guesses” also called Predictions as part of the Scientific Process.

What we DON’T know –

So how can we make a prediction or ‘educated guess’?

Above, I mentioned that 1 inch of rain was equivalent to 13 inches of snow — that might give us some insight into our water amount. 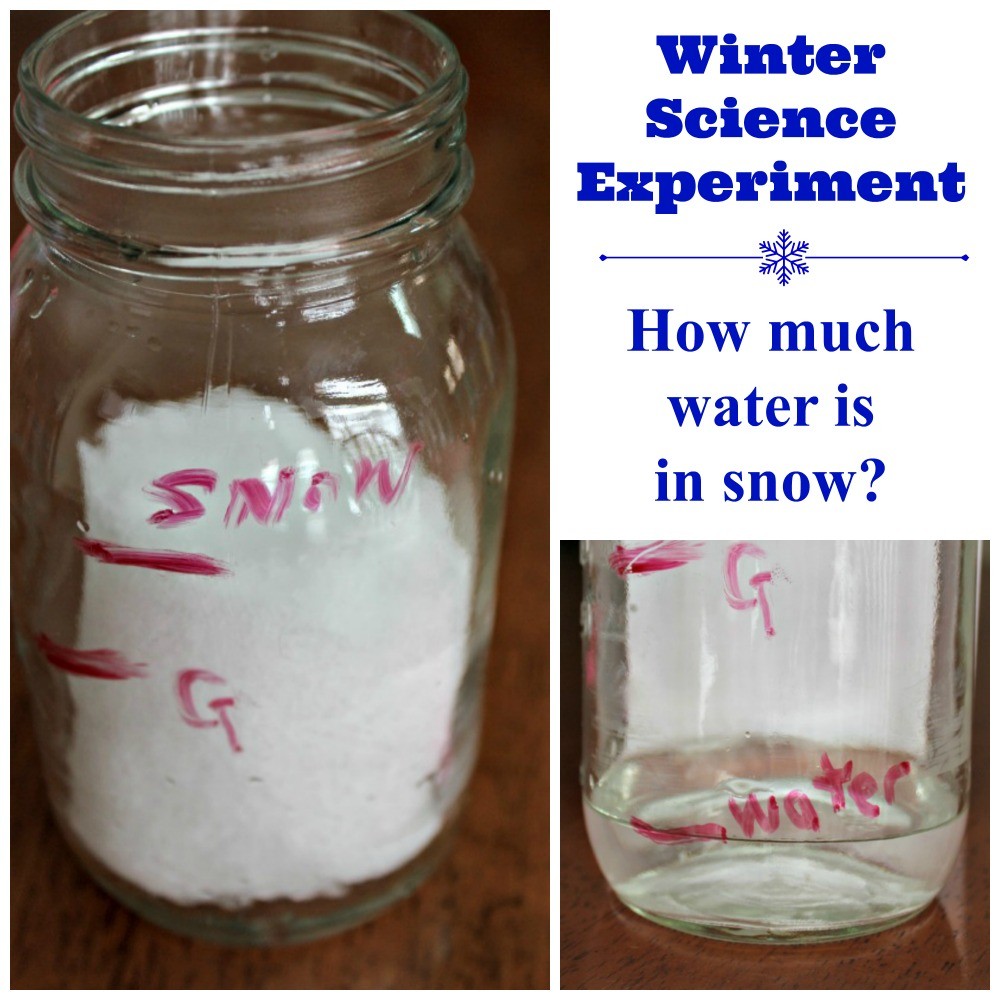 Use the dry erase marker to mark their estimation or ‘guess’ line (we used a “G” to mark ours).

This is a BONUS question – not only are we trying to estimate the amount of water that will remain in the jar, but it’s also intriguing for older kids to estimate the TIME it will take for the snow to melt.

Write their estimation on the piece of paper.  Our ‘guess’ was that it would take an hour to melt.

Or try one of these other fun Winter Science Experiments for kids! 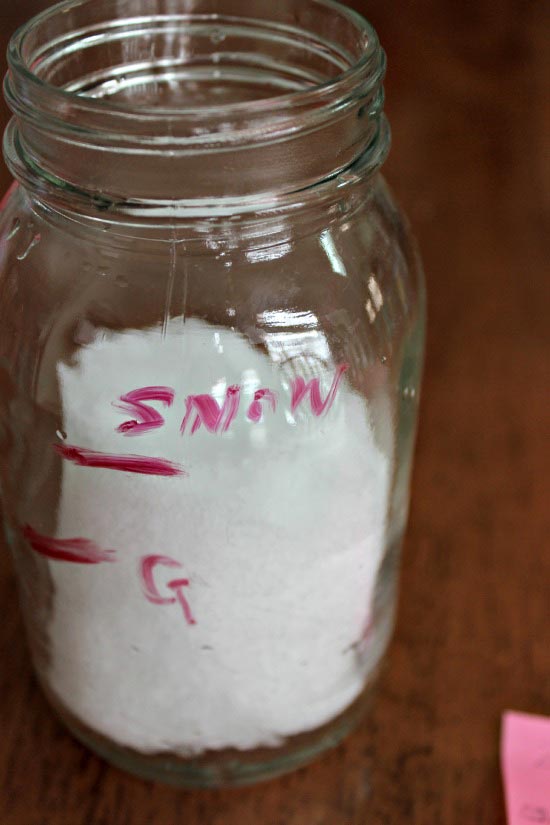 Another skill to teach kids when you do an experiment is how to observe changes — you don’t just want to leave the snow in there overnight and walk away!  There’s so much learning that happens during the melting period.

At first, we weren’t sure the experiment was going to work.  We just saw the snow getting lower but didn’t see any water forming in the jar.

In hindsight, I should have known that some of the snow would evaporate early on instead of just melting — another great lesson for kids!

There are multiple things that water can do in the water cycle — evaporate, condense, melt, etc.  If you want to tie this to the various parts of the water cycle, be sure to see the LEGO Water Cycle science project to learn more.

That jar stayed cold for a long time and the packed snow retained it’s low temperature until there was enough air surrounding the snow block to melt it from multiple sides. 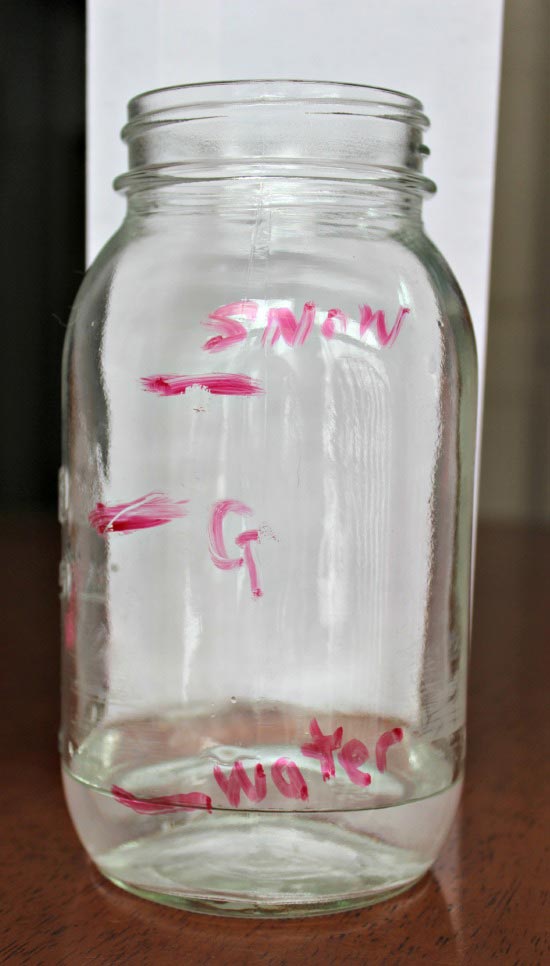 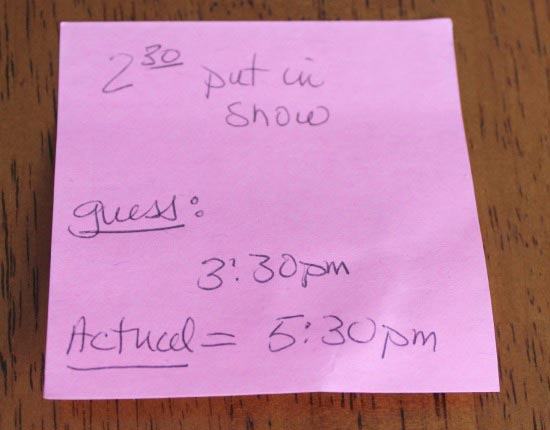 As my daughter said, it took a loooonng time 🙂 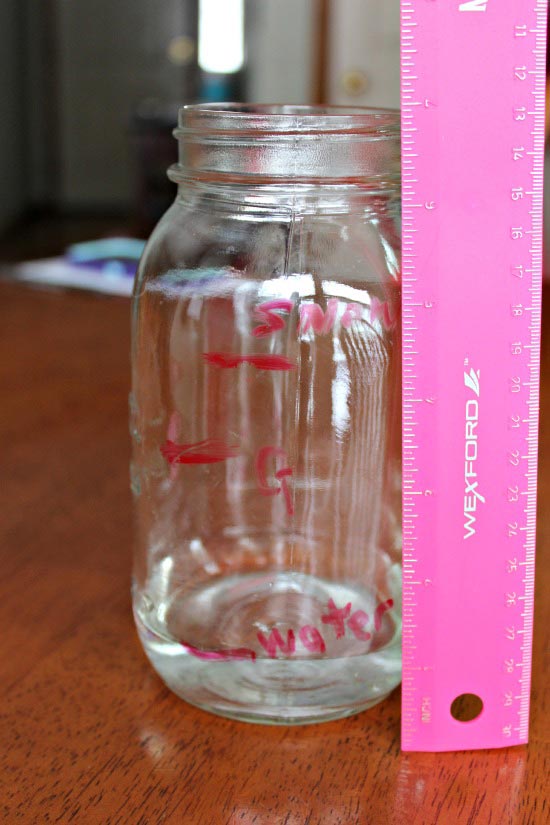 We used a ruler to measure our results as we were trying to see if we would have the same ratio as the weather forecasters but I’m not sure how they measured their snow melt.

Ideally, I think you would want to measure snow and water as volume but that’s harder to do with snow unless you have a really good size measuring cup.

By replicating the experiment (doing it again under the same conditions), you have more evidence that your observations and results can be reproduced by others and they’re aren’t just a fluke.

You should really replicate an experiment at least 3 times — but remember how long I told you it took the snow to melt?  Well, we were getting close to bedtime by the time the second jar got there 😉 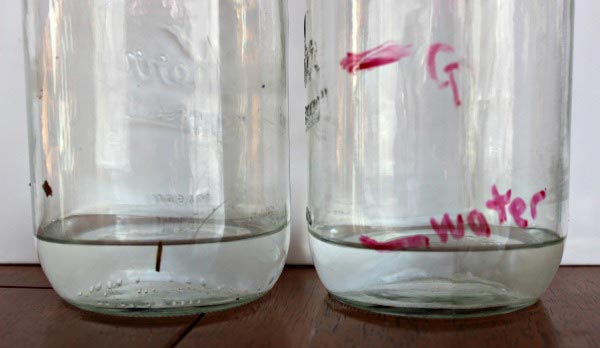 Here are the two jars side by side — the results were very similar with almost the same amount of water in the end.

Let us know if you try the experiment — what was your ratio of snow to water? 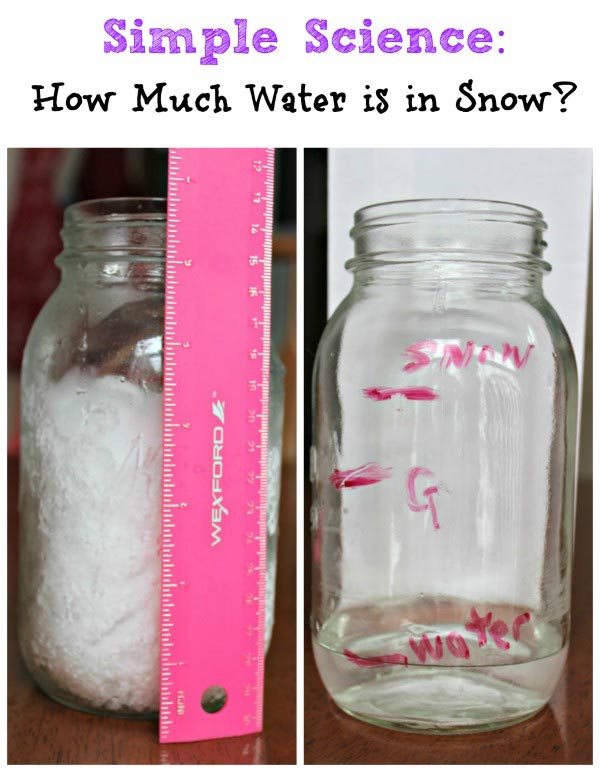