My kids are not big on going for a walk unless there’s a cool reason for being outside.  For example, a walk to the playground is acceptable but a walk around the block is met with some whining at our house.

So in an effort to get them some additional outdoor time AND include something fun to do, we decided to take a winter walk and scout out animal tracks.

You can also do this after a rainy day (look in the muddy spots) or on a beach walk (sand is a great place to find tracks).  Personally, I love seeing a new white canvas of snow and jump on the opportunity to go explore who else might be out walking that day. 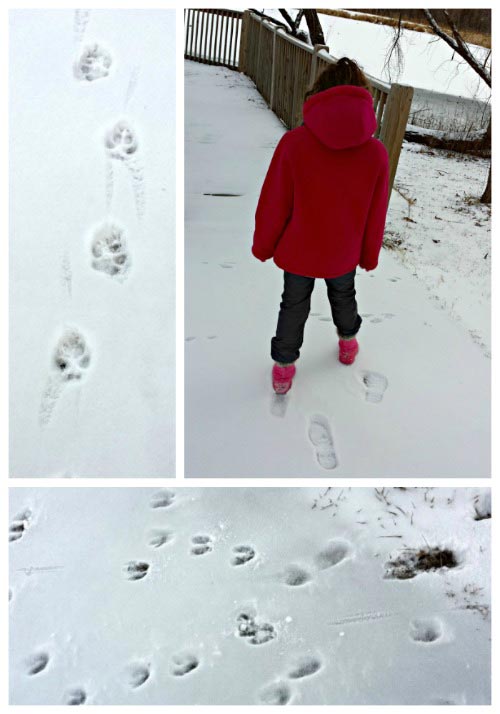 Exploring Animal Tracks in the Snow

Bundle up before heading out!

Be sure to dress warmly so that you’ll enjoy your expedition (now that’s a great word to get the kids out for a walk!)  If you’ll be walking after a rain storm, wear rubber boots.  Nothing spoils the enjoyment of a nature walk quicker than cold kids 🙂  You might also consider bringing a snack and some water if you’ll be out for a while.

Whether you let the kids bring the their camera or you just decide to have your phone with you, one of the main ideas of this activity is capturing what you find in photos so you can further investigate the tracks at home.

Having a book that identifies animal tracks will be super helpful!  Since you’ll be photographing tracks on your walk, you’ll want to have something to compare them to when you return home.  Here are a few recommendations along with affiliate links so you can learn more about each of the books —

Younger kids will enjoy the first two books as they have nice color illustrations, good text and include some basic ideas for nature exploration.

Whose Tracks Are These? A Clue Book of Familiar Forest Animals

Older kids will really like Tracks, Scats and Signs (Take Along Guides)

which is one in a great series of nature guides.  This has more in-depth information that can be used when you are scouting out animal tracks or different signs that animals leave in nature.

And while I always love to have books at home for activities such as these, you can also use an online site to compare your photos.  Animal Tracking Sheets are very helpful to print out and take with you also.  Here’s a few that show a number of tracks:

This printable Animal Track Card from the New Hampshire Fish & Game Department is an awesome resource for this activity!

Animal Track Identification photos can also be found at The Old Farmer’s Almanac.

And LLBean and the State of Maine also offer a really nice track guide for animals from Maine (which can also be found in many other locations too). 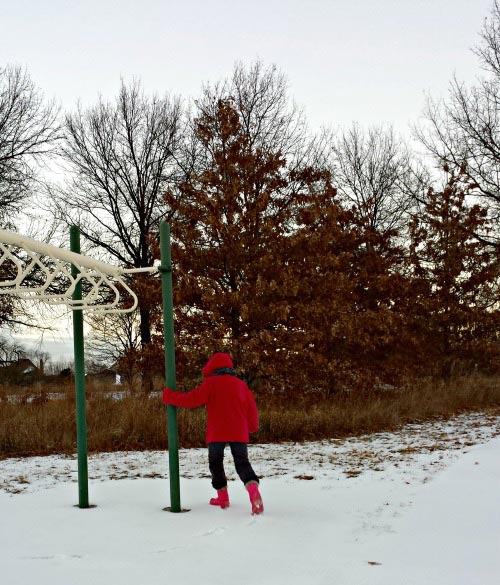 As you’re walking, be sure to go slow and look all around.  Most animals don’t follow the sidewalks like we humans do.  Look near bushes where the animals may bed down for the night and also around trees as birds and squirrels will come down the tree trunk to search for food.

When you find tracks, talk to the kids about any patterns you might see —

Are the back tracks closer together than the front?

How big are the tracks?  After you take a photo, you might have your child put their foot print next to the track to get an idea of the animals size.

Do you find prints that are close together?  This could mean that there was more than one animal walking together or it might be that multiple animals crossed over the same area at different times.

All these inquisitive questions are great for encouraging scientific investigations!  You can pretend you’re a nature detective trying to find out who was visiting the area over the past few days.

When you get home, grab a cup of cocoa to warm up and pull up the photos you took so you can compare them to the different animal prints.

We found a number of tracks on our walk: 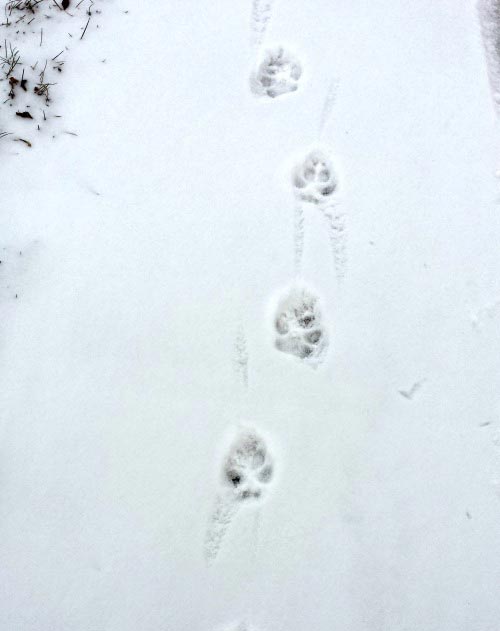 One the way to the park, we followed the tracks of a dog and their owner.  When we compared the tracks to our tracking sheet, you can see that dog/wolf/coyote tracks have small points at the top of the track where the nails also leave an impression.  Plus, these tracks were following the sidewalk so we knew it wasn’t a wild animal. 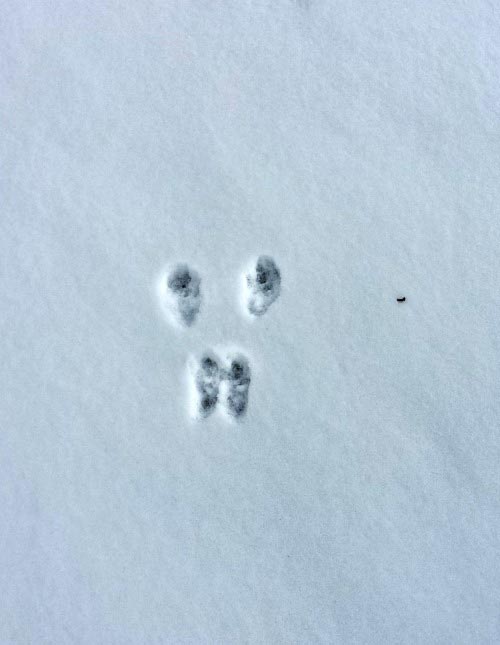 The first set of tracks we saw in the park were these cottontail rabbit tracks.  Again, the tracking sheet helped us identify them quickly.  We could see that the back legs are closer together than the front and there was a large space between each set of tracks — so we were also able to tell how far the bunny hopped.  The tracks led into a group of bushes which we think is where the rabbit den is located. 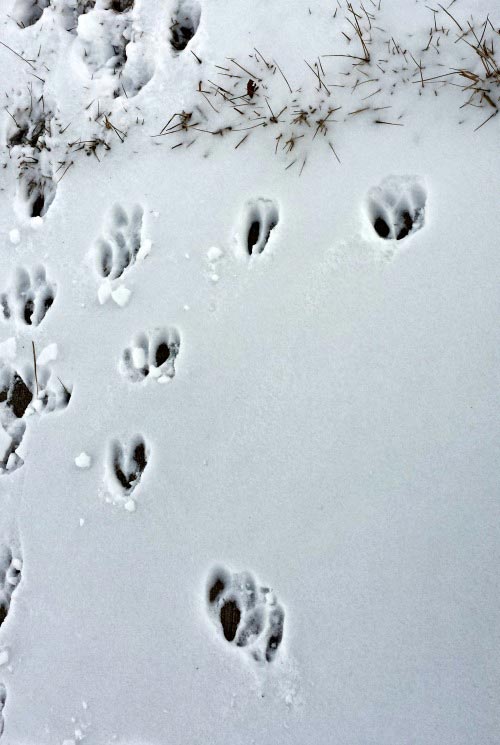 Now this is what I was hoping we’d find — deer tracks!  We frequently see deer in this park especially in the evenings.  Deer tracks have a sort of teardrop shape to them and are pretty deep in the snow due to the weight of the animal.  We found quite a few in one spot that led to/from the large wooded area near the park. 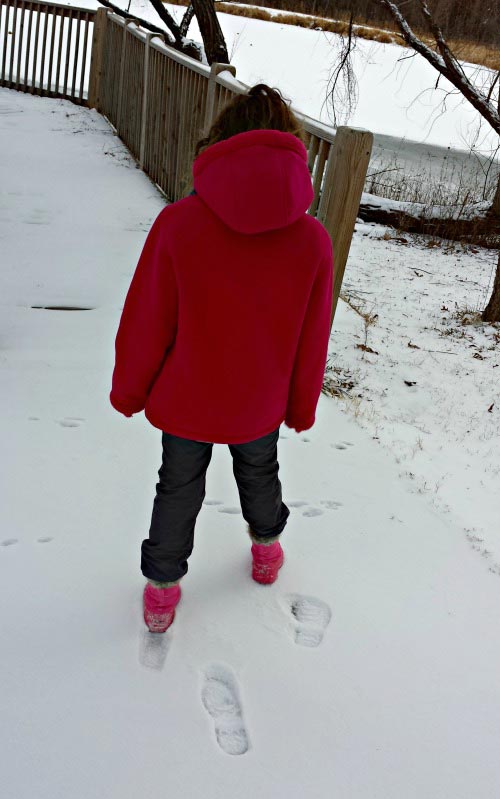 And of course we made our own tracks too!  You can see right in front of my daughter that there are a few sets of animal tracks.  We were comparing her boot tracks to the others that we found on the path — in this case, it was another cottontail rabbit. 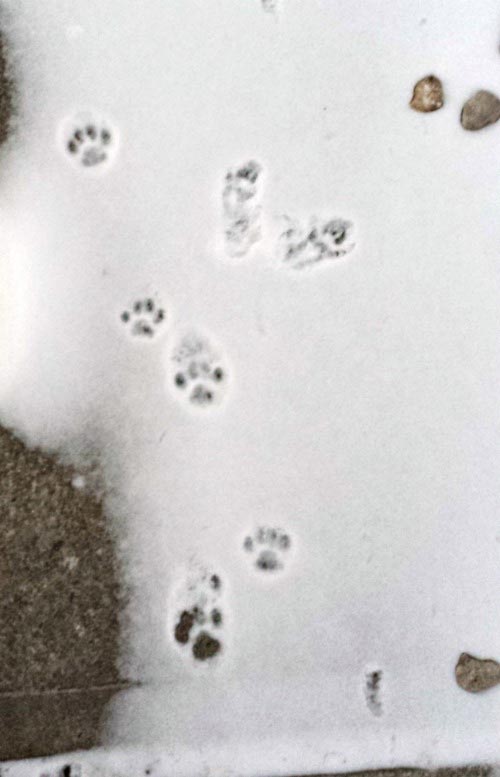 When we came upon these tracks, we were stumped for a while.  First, you can see there are two sets of tracks in the photo.  We think the ones in the upper right (that look like long claws) belong to a red squirrel.  The chart we used shows that squirrels leave four footprints in a group whereas a raccoon (our other guess) only leaves two footprints in one area.

The second set of tracks look to be something cat-like.  I say that because neighbors have reported sightings of a bobcat in the park and woods.  Maybe?  They could also be a large outdoor housecat too.

All in all, it was a pretty successful outing and definately a fun idea for a winter walk!

Have you ever searched for animal tracks?

Leave us a comment and let us know what types of tracks you’ve found!

29 Ways to be a Cool Parent this Winter 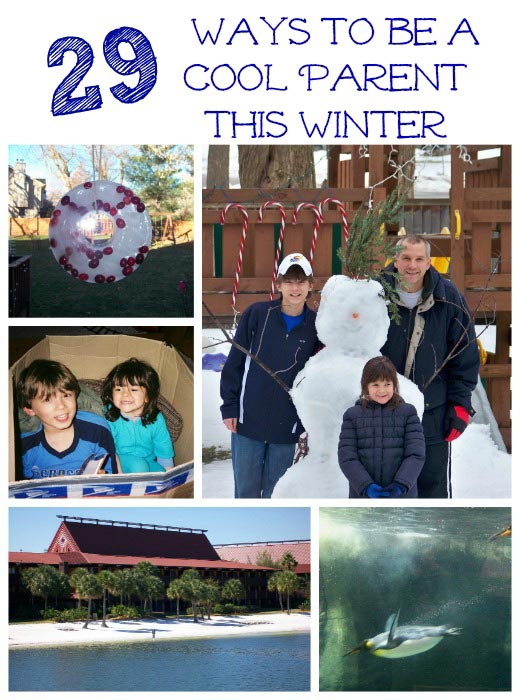