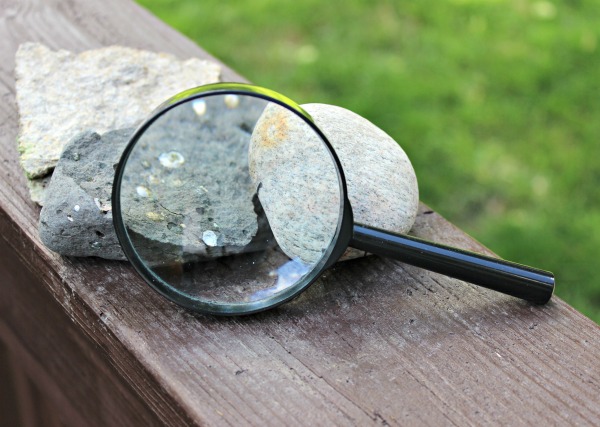 Today we are combining our Outdoor Science activities and our Simple Science Experiment series to share a fun geology experiment -- Rock Testing for Kids!

One of the easiest science activities to do with kids is studying rocks and minerals.

If your kids are anything like mine, they bring rocks home in their pockets -- frequently ;)

And you might hear the question "What type of rock is this?"

There are a few ways to test rocks -- one of the most popular ways is to test a rock's hardness using the Mohs Scale which we've shared before.

In my opinion, today's test is much more fun!

This time, instead of testing the property of a rock, we're going to test for a specific type of rock -- limestone!

This is also referred to as the Acid Test for Rocks (but we're using a much safer form of 'acid').  In addition to the detailed tutorial on how to test your rocks, we're also including affiliate links for items that will be helpful in this experiment.

The Acid Test for Rocks & Minerals

The first thing you'll need are a few rocks -- limestone is usually a tan/yellow rock that has layers.  If you have any where you live, you'll recognize it right away.

If you need to look around, try searching near creekbeds, lake areas and such -- also many garden stores that sell stones used for garden beds should have limestone; they might have some small pieces on hand that you can use.

We also chose to use a rock we found at the beach (because it had a bunch of small shell fragments within it) and a large river rock that we found near a creek (very hard, smooth and clearly not a sedimentary rock).

Plus a book on rock identification is great to have on hand for identifying and classifying the rocks you find!

Oh, and you really don't need a Magnifying Glass for the experiment but I always have one on hand so the kids can get a close-up look at things!

A Little Background on Limestone

Limestone is formed in one of two ways --

First, ocean animals such as oysters and mussels use calcium carbonate from seawater to make their shells and bones.  When these animals die, they remains settle to the ocean floor and over many years, are compacted into limestone rock.

The second way it forms is through the process of evaporation -- again, as fresh water or salt water creatures die, their shells and bones are broken up and dispursed in water.  When that water is in a shallow area such as a stream or cave, it will evaporate due to the environment around it and leave behind the calcium carbonate from the shells and bones.

Limestone can be found in many places around the world since it is formed from ocean water, sea water and fresh water or caves.

We have a TON of it here in Kansas where we live.

In fact, a few years ago on one of our side trips to the Rocky Mountains, we visited an amazing place called Monument Rock or the Chalk pyraminds located in western Kansas.

It's a place that was covered by ocean water millions of years ago when the middle of the US was underwater.  As the waters receeded and evaporated over time, these HUGE limestone mountains were formed and are still there today.

Can't you just image these growing on the ocean floor with huge prehistoric marine life swimming through them?!!

And when you find a piece of the rock that has broken off, you could use it to write with -- because it acts like chalk! That's due to the fact that one of the main items used in white chalk (the kind your kids use on the sidewalk) is calcium carbonate.

Ok, back to our rock and mineral experiment -- testing a rock to see if it's limestone.

Limestone and Vinegar: How to Test a Rock

that you would use for cooking or cleaning) for this experiment.

I LOVE using glass bowls or mason jars for our science experiments (have you seen our How Do Leaves Breathe? experiment?!) but I know some folks are concerned about having glass outdoors so I would suggest a plastic container if you don't want to use glass.

I would not use metal as sometimes metal and acids will have their own reaction and can change the results of your experiment.

Place one rock in each bowl and pour vinegar over it -- try to cover at least half of the rock.

This is one reason we do this experiment outside -- vinegar can have a super strong smell to it and my kids are really sensitive to that so being outdoors helps to disappate the scent.

Within a minute, you should see bubbles forming around your limestone rock!

The Science behind the Experiment

Vinegar is an acid and as it interacts with the calcium carbonate in the limestone, it releases carbon dioxide -- and when carbon dioxide is released in a liquid, it forms bubbles.

Which means that this is BOTH a geology experiment AND a chemistry experiment!

So here's why I use the Glass Bowls

or Mason Jars for many of our science experiments -- you can see things from all angles!

After 5 minutes, we can look from the side of the bowl and clearly see the bubbles forming around the limestone rock but not the rock we found at the beach.

Now I really thought we'd see a few bubbles with this rock since it contains some shells but they must not be the type of shells that are made with calcium carbonate.  This test can tell you quite a bit about various rocks and minerals.

So Mom learns something new too ;)

Here's a picture of the river rock (on the left) -- no bubbles what-so-ever after 10 minutes so we know that rock is NOT limestone for sure.

The bowl on the right contained our limestone rock and once you remove the limestone rock, you can see there is a lot of stuff in the bowl!

It looks like sand, dirt and other small particles -- which is exactly what it is!

And this is what it looks like through the bottom of the bowl - bleah!

It reminds me of the kids playing in the sandbox for the whole day and this is what I find in the tub after a bath (lol!).

The chemical reaction with the limestone (calcium carbonate) and vinegar begins to break down the rock into the minute particles of sand, dirt and shells that are part of its' composition.

If you have a budding geologist at home, here are some wonderful resources for rock & mineral testing that are sure to please along with affiliate links so you can learn more about each of them:

If you do have a child who LOVES rock collecting, be sure to see our How to Organize a Mini Rock Collection post too!

20 Science Experiments you can do in a Jar

How Do Plants Breathe?

Join us for amazing Outdoor Science Activities all month long!

You can find a list of which experiments & activities we're doing each day during the 31 Days of Outdoor STEM hosted by Little Bins for Little Hands.