My daughter is a HUGE fan of the Percy Jackson books.  She began reading them two years ago and has continued to be fascinated with Greek Gods and mythology ever since.

So for her 10th birthday party, she wanted to plan a Percy Jackson celebration.

We decided to host the party at a local park so we could make if feel like a real Camp Half-blood.  If you’re not familiar with the series, the first book is The Lightning Thief (Percy Jackson and the Olympians)

There are five books in the series and similar to the Harry Potter series, the books are being made into movies.  The second movie Percy Jackson: Sea of Monsters will be out this week!

We chose a location in the park that was near a lake (for Poseidon who is Percy’s father) and also had a large pine tree (Thalia’s pine).  Make sure to have the kids help with the planning if you haven’t read the book — they’ll be great at choosing some of the little details to make it a great celebration.

The ‘gods’ must have been with us for the party because it rained all day — and since Percy is the son of the God of the Sea, that was just fine with the party-goers! 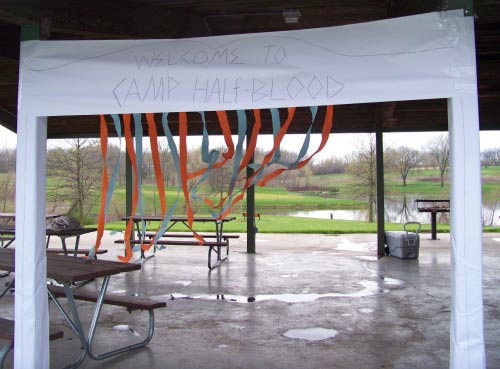 Our first goal was to decorate the site to look a little more like Camp Half-blood, the location where Percy and his friends go to train so they can fight the monsters.  We wanted the shelter area to look like you were entering Camp Half-blood, so we wrapped two of the posts in white paper and drew long lines to make them look like Greek columns.  Then we sketched out the top of a temple and hung it across the shelter. 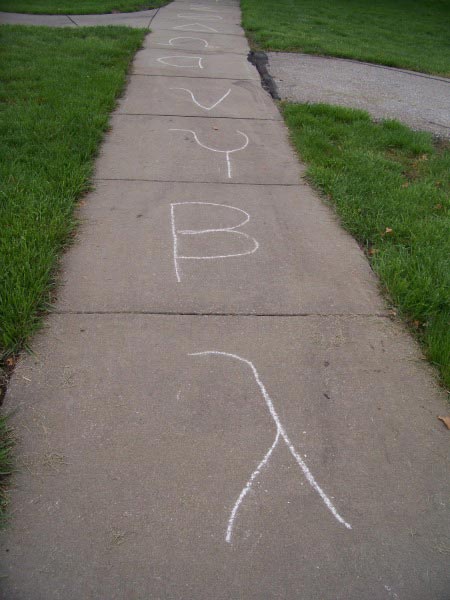 On the sidewalk leading up to the shelter, we wrote letters from the Greek alphabet.  The kids really thought this was cool and spent a while trying to spell their names using the letters.

When each of the ‘campers’ arrived, they received a Camp Schedule for the party.  This was modeled after some of the activities that were mentioned in the books. 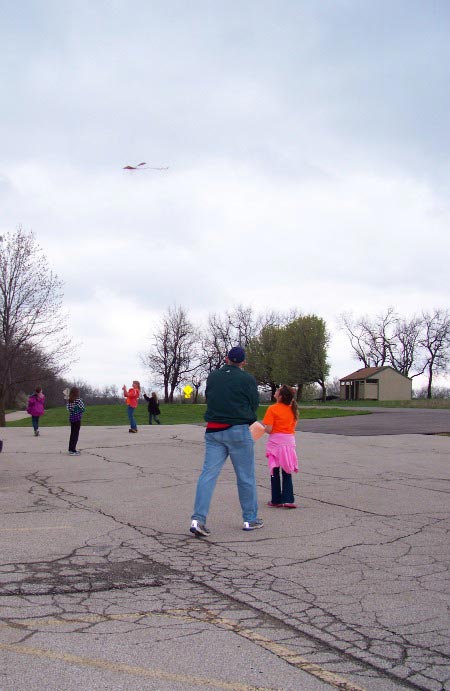 One of our first activities was free play.  We brought kites so the girls could fly them.  We thought this would be a good ‘challenge’ — taming the kite.  This was really more of a filler activity as we set up some of the other camp quests but the girls just LOVED it.  Some of them had never flown a kite before so it was a big hit.

We had two crafts planned for our campers but while they were flying the kites, some ‘monsters’ snuck into camp and took all the supplies!  So they had to head out on a scavenger ‘quest’ to find the craft items.  We hid the items around the area near places that reminded them of parts of the book.  For example, one of the items was being guarded by Poisden (near the lake), one was found by Thalia (so they needed to look for a pine tree), etc. 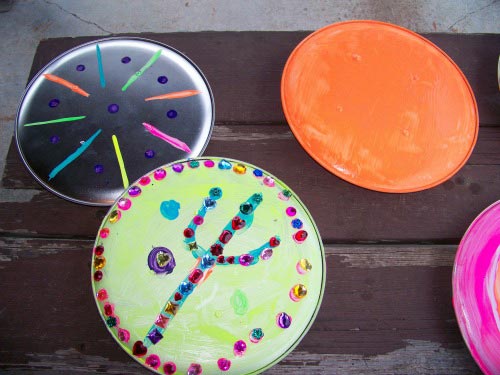 Once all the supplies were found, we had the campers each make their own shield.  These were just large pizza pans that we purchased at Walmart (they were 3.88 each).  We purchased a packet of snap bracelets at Michael’s and attached two snap bracelets to the back of the pizza pan with rivets (an easy thing to do if you have a rivet gun — and my husband was happy to buy another tool in order to help out with this 😉 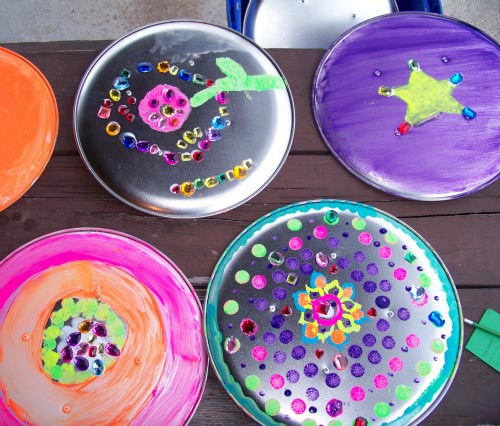 Campers used a variety of acrylic paints and jewels to decorate their own shield — they were all so creative with their designs!

The campers could also make their own camp necklace.  We used leather bands and large beads that also included animal characters. 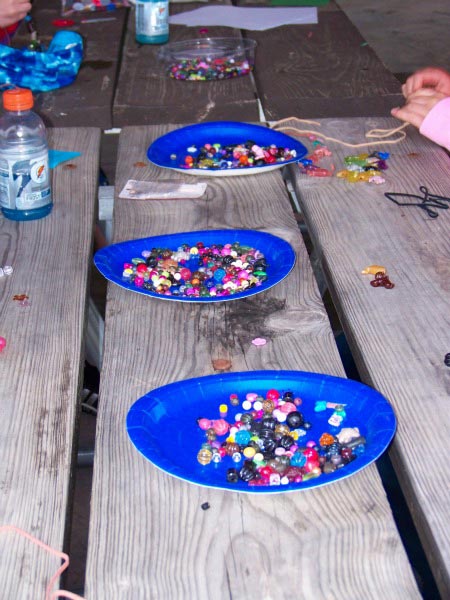 The girls enjoyed searching through the beads to find just the right ones that would represent the various camp activities. 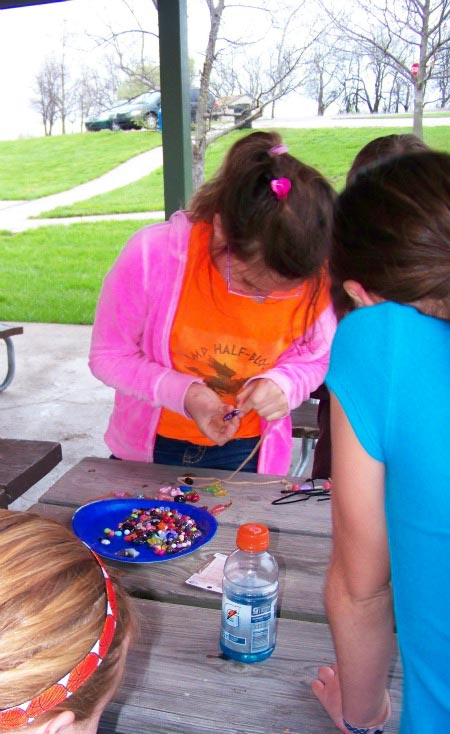 This is also part of the book — Percy & his friends earn camp beads for the various quests they complete. 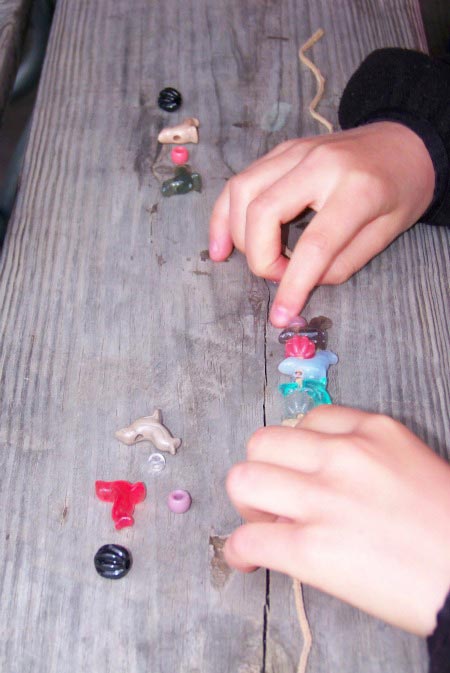 Campers Have to Eat

I’ve seen other parties who go with an all blue theme for their food items but we decided to only include a few blue things (Percy’s mother always serves him blue food).  We cooked burgers over the grill at the campsite so we could eat outside just like they would do in the books.  Campers had blue Gatorade and blue corn chips.  We also served strawberries since the real Camp Half-blood has a strawberry patch.

And of course, we had a cake.  We have a unique birthday tradition that my daughter began herself.  On her birthday, she decides what her name will be for the day and that’s the name we put on her cake.  So, she wanted to be Annabeth (Percy’s friend). 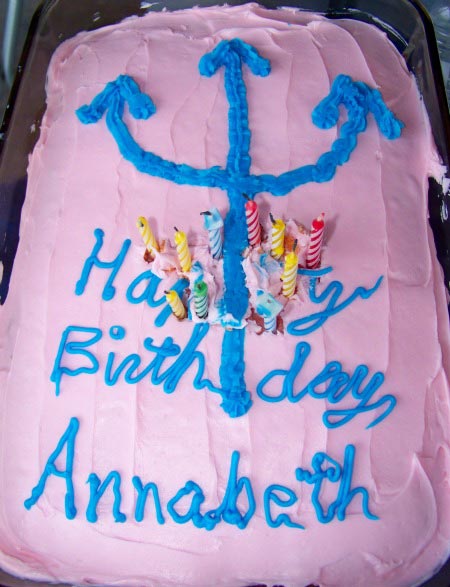 The cake didn’t quite make it in one piece during it’s transport in the cooler so we covered up the damage with the candles.  And the blue trident represents Percy’s father, Poseidon.

Gifts for the Gods

When we sent out the inviations, we requested that campers bring summer fun items that could be donated to our local children’s hosptial as a donation to the Gods. 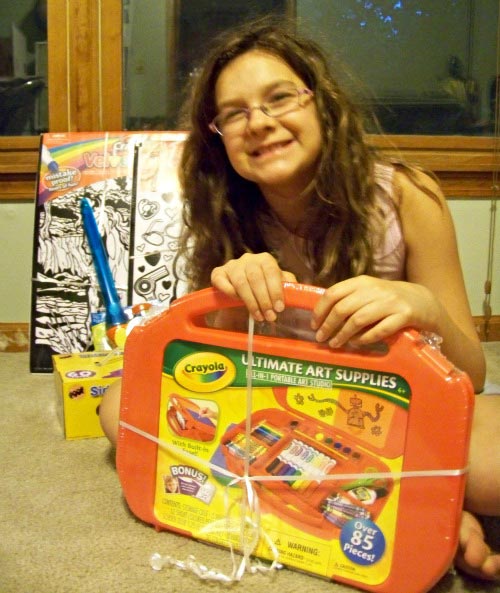 We had a great response with more than 70 books, craft items, pinwheels and outdoor play activities being donated by our camper friends!  Such a wonderful way to celebrate and pass along some happiness to others.