Put a few of these must-see movies on your Disney Watch list for family movie night before your next trip to Disney World!

Is a visit to Walt Disney World in your future? Lucky you!

My parents have retired in Florida so we have been blessed to visit the parks a few times.

Before you head off to enjoy ‘the happiest place on Earth’, there are a few must-see movies to add to your Disney watch list that will help to enhance your visit to the Disney parks! 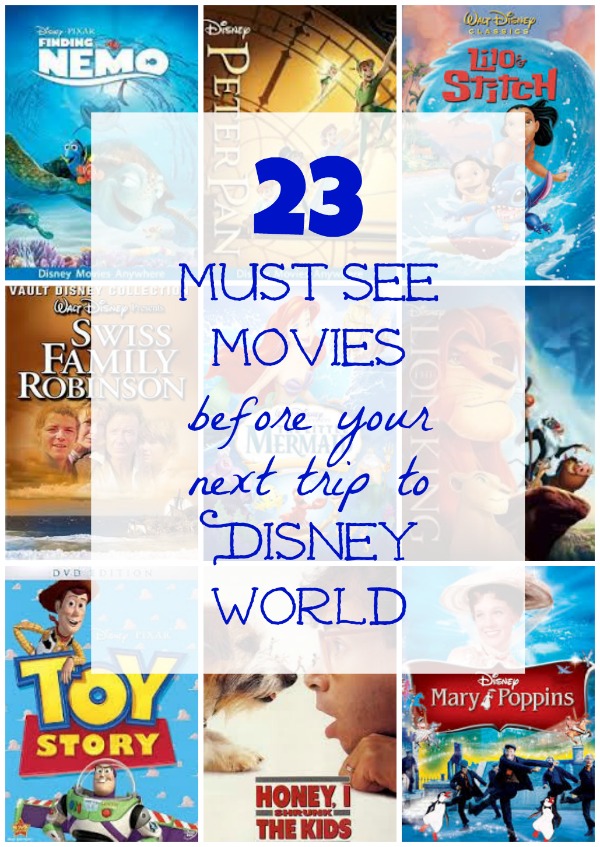 23 Disney Movies to See before Going to Walt Disney World

We love connecting movies to life, especially travel (have you seen our list of 10 Terrific Road Trip Movies for Kids?!)

There are so many rides & attractions at Walt Disney World that are based on famous Disney films.

For example, one of the most well-known and photographed attractions is the Dumbo ride at Walt Disney World.  While we could have included Dumbo as a recommended film, you can really enjoy the ride without knowing the details of the movie.

The first time we climbed into the Swiss Family Robinson’s treehouse and sailed the raft to Tom Sawyer’s Island, my kids were confused.  They hadn’t seen either of the movies and once I explained they were ‘live action’, our kids were really shocked to know there were non-animated Disney movies!

So our family movie nights expanded to include some of the older, non-animated features that I enjoyed as a child and quickly became family favorites.

For this list, we focused on movies that would enhance your visit to the Disney World parks — these are films that will really help your kids to understand more about some of the theming used on the rides, attractions and shows throughout the four parks.

For each movie, we’ve included details about which rides or attractions are connected to the film along with affiliate links so you can learn more about the movie (in case you haven’t yet had the chance to see it!).

And I know some of these films can be harder to find (especially the old classics!) but if you’re an Amazon Prime member, you can stream most of them (some are even included with your membership!)

If you’re not yet a member, Try the Amazon Prime 30-Day Free Trial

tops my list for a few reasons – the Buzz Lightyear Space Spin ride at the Magic Kingdom and the (very popular) Toy Story Mania ride at Hollywood Studios.

Both are worth riding, especially for families as they offer an opportunity for families to compete to see who can score the most points.

Another great movie to see as it covers a few attractions at WDW is Finding Nemo .

The first is The Seas with Nemo & Friends at EPCOT.  Climb on the ‘clamobile’ for a fun adventure with all the characters from Nemo; and at the end of the ride, explore a great under sea area with live animals and some of the characters from the movie.  Younger kids will love ‘Turtle Talk with Crush’, located in the same area.

You’ll also want to catch the ‘Finding Nemo – the Musical’ at Animal Kingdom.  When we visited, half of our party hadn’t seen the movie prior to this AMAZING show.  We found ourselves explaining a few things but we all enjoyed the show (in fact, we felt it was one of the best shows at the Disney parks!) And if you’re a fan of ocean creatures, try these 18 Awesome Ocean Activities to go with the movie too.

Yes, you could ride Peter Pan’s Flight at Magic Kingdom without seeing the movie, but flying over London and on to Neverland is so much more fun when you have seen Peter Pan

And of course, there’s all the Tinkerbell experiences at Disney that also tie into this film (I know Tinkerbell has her own movies, but it’s always great to see where characters started their journey).

Did you know that Swiss Family Robinson was first a book?  If you like book/movie combos, be sure to see our list 25 Best Kids Books Made into Movies.

In addition to the amazing theming at the Animal Kingdom related to the movie, you should also see The Lion King

if you plan to watch the parade or see the Festival of the Lion King – both at Animal Kingdom.  There are areas of Animal Kingdom that reference the characters in the movie too, such as Rafiki’s Planet Watch.

At EPCOT, you can experience the ‘Circle of Life‘ – an environmental film for families that includes live action & animation (and of course features some of the main characters from the Lion King).

is also a film that transcends a few of the parks.  First, the Beaty and the Beast show at Hollywood Studios is a live action show based on the movie.  Kids who know the songs will love to sing along at this musical performance.

In Fantasyland at the Magic Kingdom you can find Belle’s cottage, the Be Our Guest Restuarant, and Enchanted Tales with Belle.  And the new Beaty and the Beast Sing Along can be experienced in EPCOT at the France pavilion.

Watch Now:  The live action version of Beauty & the Beast is available!

If you enter Hollywood Studios, your first question might be “What’s that big blue hat?” – but if you’ve seen Fantasia

, you’ll know!  Mickey’s sorcerer’s hat is one of the most famous symbols in the parks (but sadly, some folks have never seen the movie that made it so famous). The movie itself is also part of the exciting nighttime show ‘Fantasmic’, which is shown at Hollywood Studios on certain nights.

You’ll also see the hat and the magic in the Magic Kingdom at Mickey’s PhilharMagic, a 3D show where Donald borrows Mickey’s hat and gets himself into some trouble!

Not as good as the book, but entertaining for kids is the movie Tom and Huck

.  The movie is based on the stories of Tom Sawyer and Huck Finn – both by author Mark Twain.

And if your kids plan to search the caves and look for paint brushes on Tom Sawyer Island at the Magic Kingdom, knowing the story makes it more fun to explore!

Watch Now: Both Tom & Huck and the newer version of The Adventures of Huck Finn are both available

Be sure to have The Little Mermaid

on your Disney watch list before your trip — it will help your kids to recognize the wonderful characters they will encounter in a variety of locations.  A favorite princess, Ariel can also be found at more than one park.  In Hollywood Studios, families can experience a very fun show at Voyage of the Little Mermaid – great effects and puppets integrate with live action!

And coming soon to the new Fantasyland expansion in the Magic Kingdom will also feature an amazing Little Mermaid ride as they continue to add on to that area of the park.

Ah, those lovable monsters in your closet!  If you love humor (and most kids do!), they will love Monsters Inc .

Be sure to stop by the Monster’s Inc. Laugh Show at the Magic Kingdom.

My kids thought it was amazing that they could ask questions to the monsters and have them answer!  And you can also text in jokes to see if yours gets told to the audience.  The monsters also show up in the parade at Hollywood Studios.

Stitch shows up in the weirdest places at WDW – like crawling out of the cement in one of your photos as you enter Hollywood Studios.

will introduce the kids to this funny (and sometimes creepy) alien and also some of the Hawaiian culture they may encounter if you stay at the Polynesian Resort (where Lilo & Stitch both make an appearance at the character breakfast).   Kids may also want to become part of the Galactic Federation as they ride Stitch’s Great Escape at the Magic Kingdom.

This is also a great movie to see if you ever plan to visit Disney’s Resort in Hawaii — you can read more about that here: 9 Must-do Activities at Disney’s Aulani Hotel & Resort

In 2021, Disney plans to open Remy’s Ratatouille Adventure at the France pavilion in Epcot!  This fun ride will shrink you to the size of a mouse (or rat 😉 and then send you off on an awesome adventure through Gusteau’s restaurant.

, and Mickey Mouse Clubhouse.  Parents may want to watch a episode or two so you can sing along with the catch music during the show 🙂  There’s also some great photo opps with the characters in the park too.

Honey, I Shrunk the Kids

Sadly, Disney closed this awesome attraction a few years ago 🙁  But it’s still an awesome movie to see!

This movie also made our list of 12 Movies that will Inspire Kids to Tinker.

Anyone will enjoy the 4D ‘It’s Tough to be a Bug’ at the Animal Kingdom (Disney says 3D but trust me, there’s a fourth dimension to the show!)  The show is hosted by Flik from A Bug’s Life

who brings along many of his friends.  The bugs also show up in the parade at Hollywood Studios.

Mary Poppins is also one of the most popular Disney musicals, so you’ll hear songs from the show and see the word ‘supercalifragilistic’ referenced throughout the parks.  And if you happen to visit or stay at the Grand Floridian, you may even run into Mary one morning (plus you can see the penguins playing in the fountain there too!)

If you’re having lunch at Tony’s Restaurant at the Magic Kingdom, you’ll get ‘extra points’ if you can answer the questions from the waiter (all from Lady and the Tramp

).  You’ll also enjoy some of the connections you’ll see during your visit if you’ve seen the movie.

One of the newest attractions in the Magic Kingdom is the Seven Dwarfs Mine Train (which is actually a rollercoaster).  The theming and songs on this ride are right out of Disney’s first animated film, Snow White and the Seven Dwarfs.  The concept of ‘working in a mine’ is a foreign one to many kids of this generation so seeing the movie will help them understand the barrel cars and other items they will see in the queue and during the ride.

Not a Disney film but a great combination of movie & ride – seeing Star Wars will help as you navigate all the new areas at Hollywood Studios!.  You may also get a chance to bat lightsabers with Darth Vader as you tour the park.  And younger kids can attend the Jedi Training Academy at Hollywood Studios too!  Plus one of the newest resorts to stay at is the Star Wars: Galatic Starcruiser which is opening soon!

There are a number of new Star Wars activities & rides being added to the parks so be sure you’re up on the whole series!

Pirates of the Caribbean

Now that Captain Jack Sparrow has been added to the Pirates of the Caribbean ride at the Magic Kingdom.

So if you haven’t seen Pirates of the Caribbean

before your visit, you’ll probably want to on your return.  Captain Jack also hosts his own pirate tutorial for kids in the Magic Kingdom’s Adventureland.

Raiders of the Lost Ark

There are a few attractions at Hollywood Studios that relate to Indiana Jones and the Raiders of the Lost Ark .

The first is the Indiana Jones Stunt Spectacular! (popular with tweens and teens).  You’ll also see Raiders as you travel through the Great Movie Ride too!

Why Kids Should Travel & What They can Learn on the Trip 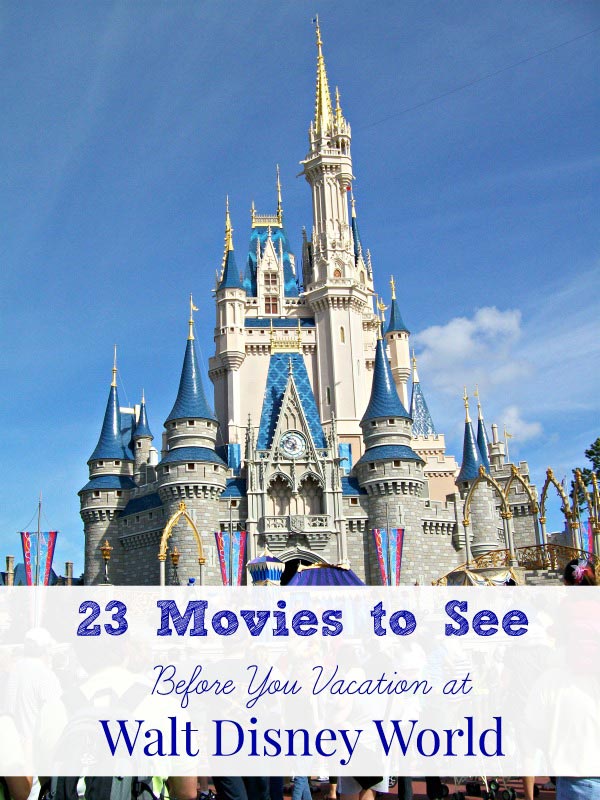