Explore the world under the sea with this Ocean Layers Activity for Kids!

We LOVE doing science projects about the ocean’s zones and layers each summer!  It just seems like the right time to explore the big blue sea and learn a little about our favorite marine animals too.

Today’s activity not only explores ocean habitats for kids but also combines some awesome science, math & art as you create your own scale model chalk drawing of the ocean zones! 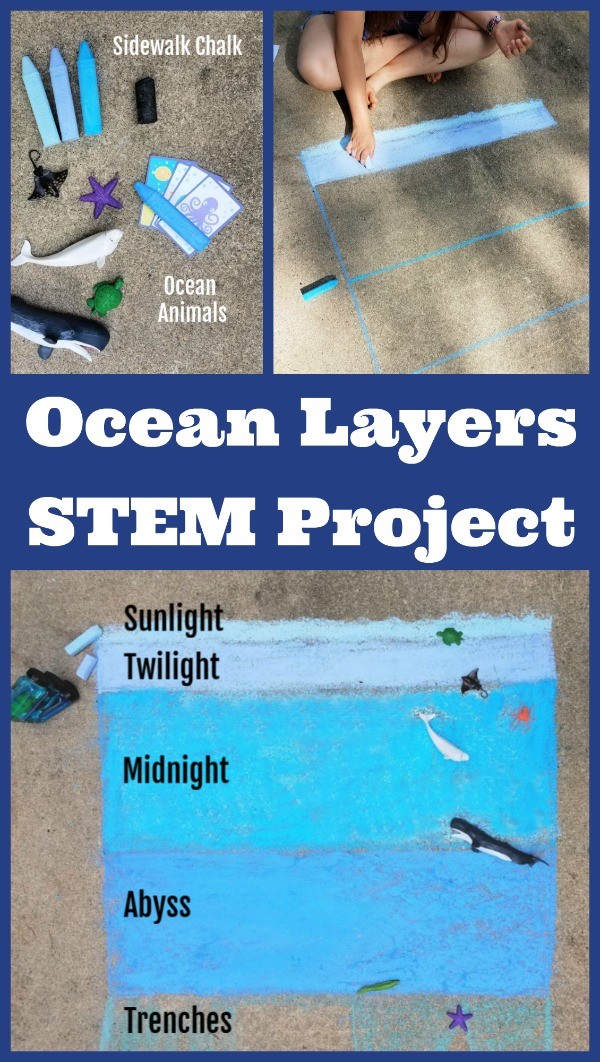 Our last under-the-sea chalk activity was such a hit — see How to Measure and Draw A Life-size Whale – that we thought we’d try another one this summer too.

Learning about animals and habitats is great for kids of all ages.  And the best thing, humans learn something new about the ocean every year — scientists and researchers discovered 71 new ocean species in 2019 alone!

And while this activity will seem like a lot of fun (it is!), you’ll also find it’s full of math (measurements & ratios) and science (learning the names of the layers and which animals live where) just like these other 18 Ocean STEM Activities for Kids.  It’s a fun summer activity to do at home or a creative idea for the school year as a group project for kids during an ocean unit study. 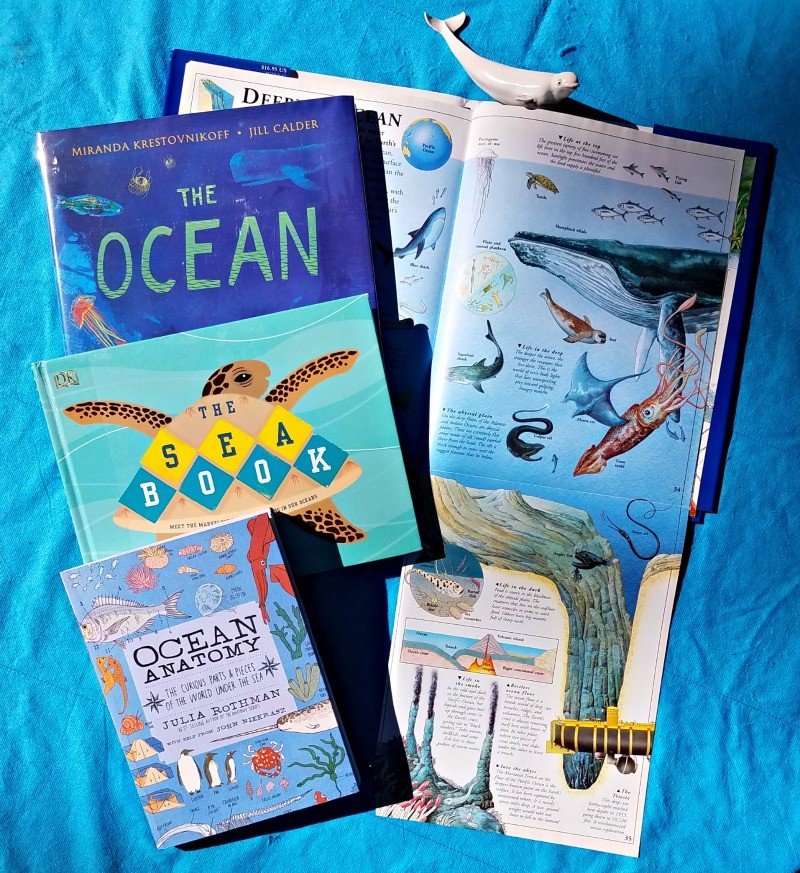 First, we found some really amazing kids books about ocean layers and zones so be sure to read a few of these before or after your activity!

The Sea Book is a beautiful book for kids ages 3 – 8 years old.  There’s a nice spread titled “What does the bottom of the sea look like?” with all the ocean layers, along with tons of facts and answers to questions kids usually ask.

Ocean Anatomy is one of our new favorite books! Similar to Nature Anatomy, the book is a wonderful reference that covers ocean layers, the anatomy of sea creatures, tidal zone haibtats, bioluminence and so much more. It’s perfect for kids of all ages & families/adults too!

The Ocean: Exploring our Blue Planet inspires the reader to learn about marine animals living in all the ocean zones!  Beginning at tidal pools and moving down to the ocean depths, kids will love seeing the colorful illustrations and various animals that swim in all the layers of the sea.

Highest, Longest, Deepest: An Exploration of the World’s Most Fantastic Features (the open book in the above photo) is an older book but such a cool find!! It has TONS of great facts about ocean zones and marine animals (in addition to other types of habitats and places around the globe).  The ocean area has a fold-out page so kids can get a great look at the various animals that live in different ocean layers.

See all of our recommended Ocean Books & Activities for Kids in our Amazon storefront too!

We’ve listed a few supplies needed for this activity along with affiliate links just in case you have a hard time finding items in your area:

This is actually a STEAM activity for kids – a combination of science, art and math.  You could also include technology in this activity since you’re using a computer to find information about ocean layers too 😉

Like I referenced earlier, we’re going to draw a scale model of the ocean’s layers — and don’t worry, I’ve done all the math for you 😉

First, you’ll need to assign a chalk color to each of your ocean layers.  You’ll want the lighter blue colors for the top ocean zones and use the darker blue, gray or even black for the lower layers of the ocean.

Since sunlight reaches the top few layers of the ocean, they appear to be a lighter shade of blue when we look at them so this will help kids understand why layers of the ocean appear to have different colors (see our post on Light Refraction Experiments to learn how light travels through water). 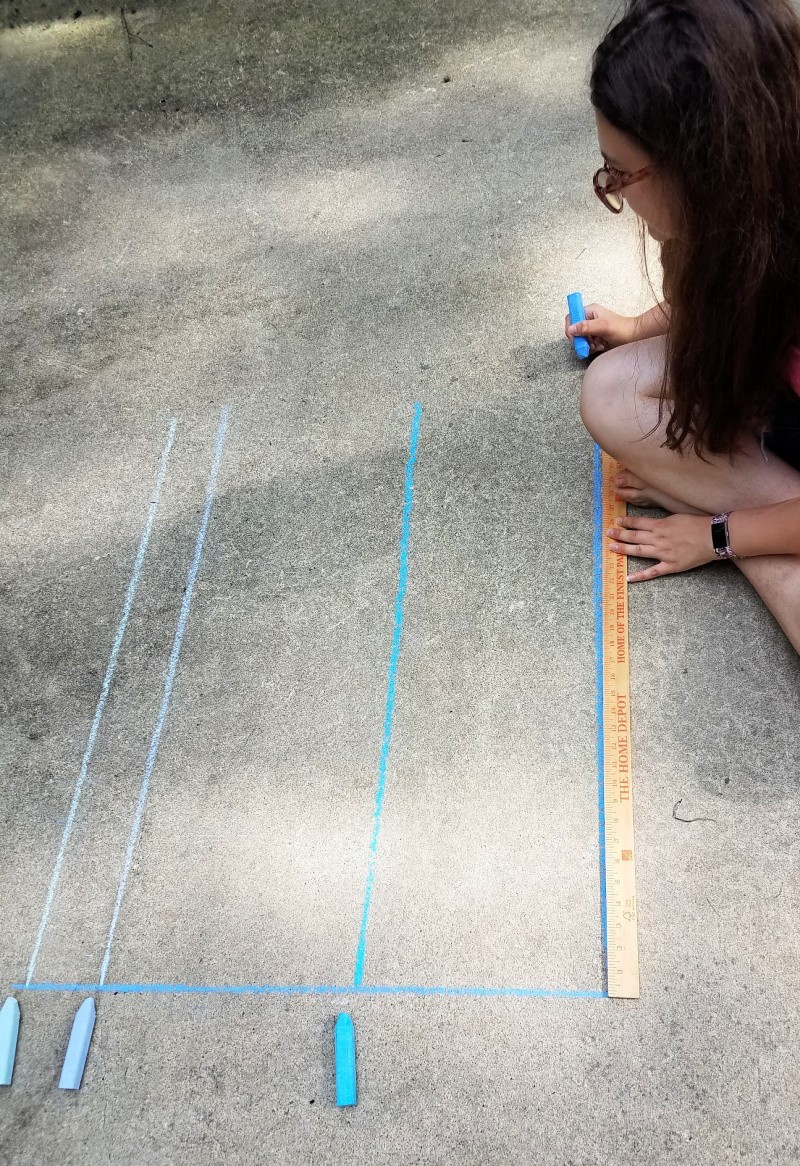 Next, use your ruler or yardstick (or even a kid-friendly Tape Measure!) to draw a vertical line (one that goes up & down) that’s 30 inches long.  Once the vertical line is drawn, you will now measure for each ocean layer and draw horizontal lines.

This is where it gets interesting 🙂

So at 1 inch on the ruler, draw a horizontal line across your surface.  Our horizontal lines were 36 inches across since we had a large, outdoor area to work on for our project.  But don’t worry, you can easily have lines that are only 12 inches long if that’s the space you have for the activity.

Your next layers will measure as follows — draw horizontal lines for each layer using a different chalk color:

Once each line is draw for the various layers, it’s time to color them in — the fun part!  We recommend using the side of the chalk pieces for this if you have a large model.

And as you can see in our photo, we lined up each blue color next to the line we drew so we could easily see what layer it matched.

Just a quick note on how we did the math for this: 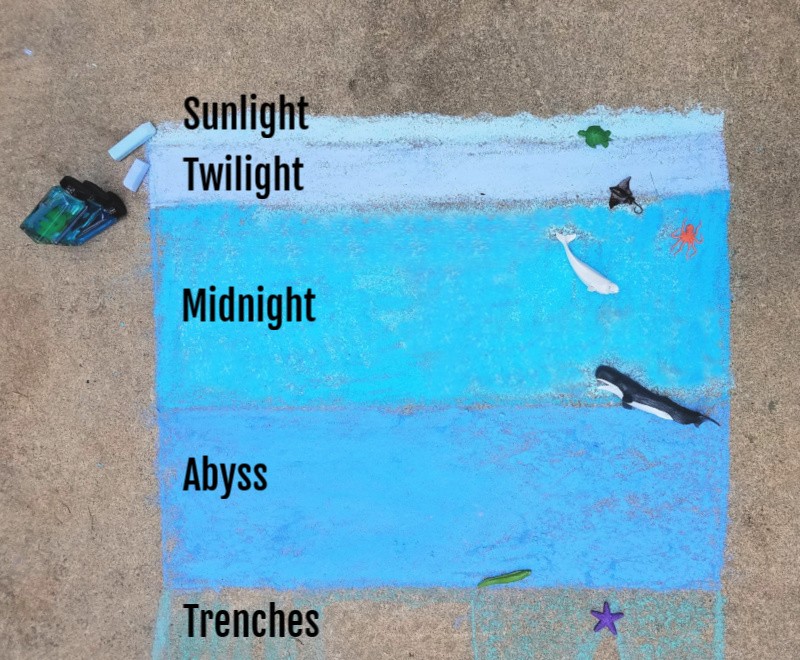 Now that all the layers are drawn, it’s a great time to talk about each of the five ocean layers.  This is also the time to grab those Ocean Animal mini figures so kids can place them in the correct zone too!  You can use the books we recommended above if you aren’t sure which layer hosts a specific marine animal.

The Sunlight Layer (also called the Epipelagic Zone) is the surface layer of the ocean.  Light enters this entire layer which means this section of the ocean also has some heat.  Most of the ocean animals we know – jellyfish, sea turtles, dolphins, whales – live or swim in this zone.

The Twilight Layer (also called the Mesopelagic Zone) allows some faint light to enter.  This is the first layer where we will find bio-luminescent creatures. Sharks, crabs, rays and squid are found in this zone.

The Midnight Layer (also called the Bathypelagic Zone) has no light that enters the layer.  The only light here is that which is produced by animals themselves. The sperm whale can dive down to this layer to find food. Squid, large whales,octopus and sea stars also dwell in this zone.

The Abyss Layer (also called the Abyssopelagic Zone) has temperatures near freezing.  No light at all exists in this layer.  Most of the creatures that live here are invertebrates (animals without backbones) such as small squid, tube worms and basket stars.

The Trenches (also called the Hadalpelagic Zone) is the deepest ocean layer.  The deepest part of the ocean is known as the Mariana Trench, which is located off the coast of Japan. Believe it or not, starfish and tube worms can still live at this level!! 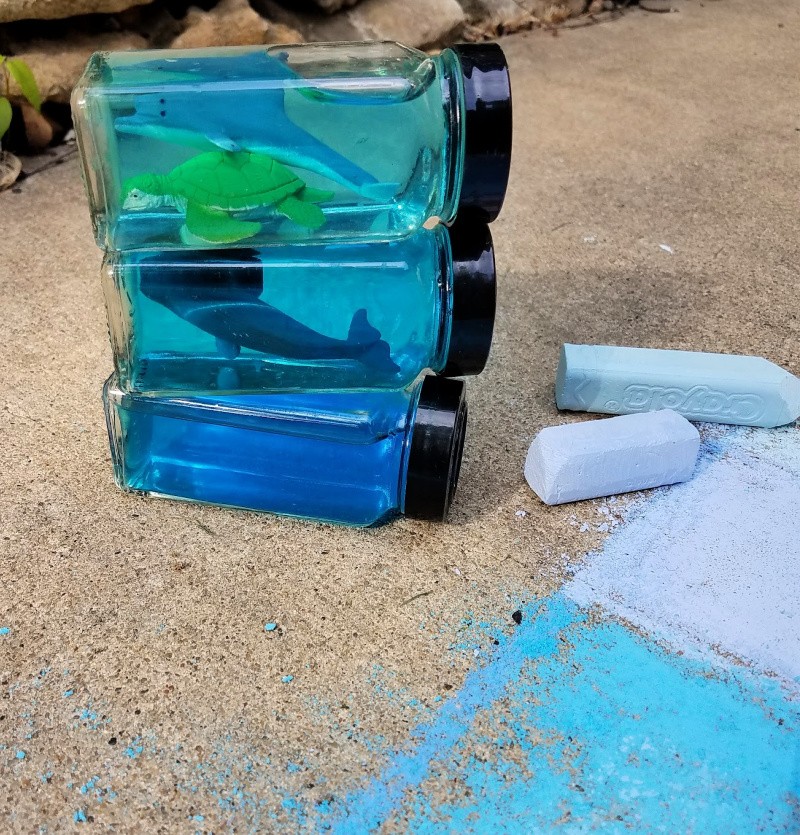 Check out these other creative ways for kids to learn about life under the ocean!

Learn about Ocean Zones: Make your own Ocean in a Jar