A list of favorite children’s books made into movies — perfect for family movie nights, classroom activities and read aloud sessions!

I’ve often used (and recommended) the technique of pairing books with a movie or activity (have you seen our 20 STEM Activities Inspired by Kids Movies yet?)

It’s a great incentive to get kids to pick up a book and also (once they’ve seen the movie) have a fun  discussion about which they enjoyed more.

There are SO many kids movies that are based on books (more than 100 of them!)

We’ve narrowed down the list to our top 25 movies based on picture books & chapter books and these book/movie combos are perfect for kids & adults to watch together! 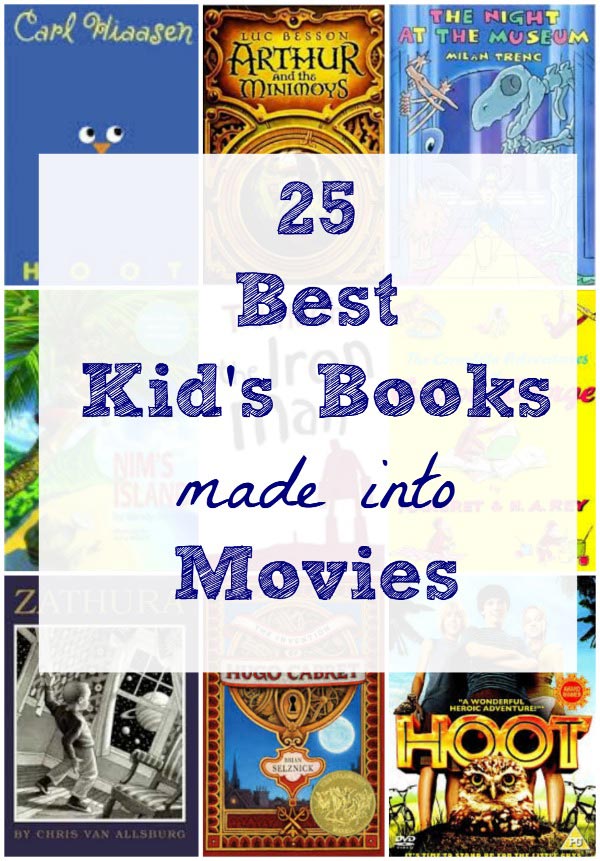 25 Best Children’s Books Made Into Movies

I’m sure you’ve heard that the book is always better than the movie — and in most cases, I would agree.

My daughter adores the Percy Jackson book series (a fictional Greek mythology series which is very popular with many kids & tweens).  She’ll be the first to tell you ‘read the book but DON’T see the movie’ — she hated the film The Lightning Thief and so did many of her friends.  In fact, I think the disappoinment in the movie was pretty universal as the studios don’t seem to have any plans to make another.

I was equally disappointed with the remake of Mr. Popper’s Penguins 🙁

On the flip side – Shrek — we LOVED the movie!

Both of my kids thought it was hilarious and definitely wanted to see the second film too.  However, the book was a dud in our eyes.  It was not very engaging (and yes, we read it before seeing the movie).

And the third example, books that are NOTHING like the movie.

Have you read Alexander and the Terrible, Horrible, No Good, Very Bad Day

It’s one of my favorite picture books for kids; I loved it as a kid and both of my kids really enjoyed reading it too.  Now the movie (which just came our last year and starrred Steve Carrell) was cute and funny but really nothing like the book at all.

For this list, we feature both kids books AND movies that are highly recommended!

You’ll find both the book & movie pairings below along with affiliate links for your convenience since a few of the books have different movie titles and some may not be widely known.

No matter what order you decide — read the book then see the movie or view the film and follow it with the book — I’m sure you’ll find some great titles for family movie nights!

Kids Picture Books Made into Movies

Chris Van Allsburg has a few picture books that have been made into awesome movies.  One of our favorite space adventure is  Zathura which is a picture book enjoyed by both younger & older kids.  And

is a fast-paced trip through space that shows the importance of sibling connectedness.

Many Disney animated films are derived from books; one of our favorites is the classic fairy tale of Rapunzel being tranformed into the amazing film

I’ll bet this is a surprise for many reading our list — yes,  Night at the Museum (the movie)

is in fact based on a series of kids books, The Night at the Museum (book)

!  The book is a short 32-page read (very fun to do as a read aloud with the mystery & humor included) and the movies include lots of historical references so also educational for kids 😉

Watch the FREE Trailer:  Night at the Museum

for kids of this generation.  If you’re able to see the movie in 3D during the holidays, it’s well worth it!

This was one of those movies remakes that I held my breathe on as I saw it advertised — because I love the Curious George books!  But rest assured, the film is great!  I would suggest reading  The Complete Adventures of Curious George since the movie Curious George

includes scenes from more than one of the books.

I know this is a stretch as a picture book but even though it’s extremely long, it is considered one — and an amazing read for older kids & tweens!   The Invention of Hugo Cabret

is the book that inspired the award-winning movie,  Hugo

– both are visually AMAZING!

Are you a book lover? Try Audible and Get Two Free Audiobooks

has been made into both animated & non-animated films.  Our favorite version of the movie is Charlotte’s Web (2006)

. And if you haven’t read the book before, there is a sad part to the story so this might be one of the first times you’ll see younger kids cry (during a story or movie).

is a top pick for younger kids.

How to Train Your Dragon (book)

is a fantastic series of chapter books that are perfect for kids ages 7 – 12 years.  The film,  How to Train Your Dragon

is, in my eyes, even better than the books (and I rarely say that 🙂  and very much enjoyed by kids & adults alike!

has short chapters and shares the endearing relationship of a boy and his bear.  I actually think the book makes the characters feel younger than they are portrayed in the movie, Winnie The Pooh

but otherwise, we loved them both!

was published in 1968.  It shares the story of a metal man who visits earth, befriends a boy, eats farm equipment and then defends the world from a space monster.  The movie  The Iron Giant

shares some of these overlaps but does have it’s own story line.  Both are memorable and lead to some interesting discussions with kids because of the historic setting & details shared in each.  Highly recommended!

Another instance where the movie title was changed slightly from the book.   Arthur and the Minimoys

.  Both are great adventures tales about a boy named Arthur who comes across an (almost) invisible world of mini people!

was made into one of Disney’s most popular and best loved musicals,  Mary Poppins (movie).

Or better yet, read the book before seeing the *NEW* Mary Poppins in theaters December 2018!

(which is the book) that sets off on an adventure and meets a family.  The movie  Paddington

was released this year and uses computer animation to create some of the characters & scenes.

Chapter Books Made into Non-Animated/Real-life Movies

While Johnny Depp is a great actor, we prefer the pairing of Charlie and the Chocolate Factory

with the original movie Willy Wonka & The Chocolate Factory

(classic family film!) rather than the newer version.  Whichever you choose, both are a fun read & watch!

Walk the yellow brick road with The Wonderful Wizard of Oz

Watch the FREE Trailer:  The Wizard of Oz (movie is currently FREE on Amazon Prime until 10/1/18)

Watch the FREE Trailer:  Harry Potter and the Sorcerer’s Stone

The Lion, the Witch and the Wardrobe (from The Chronicles of Narnia series)

is actually book 2 in the series.  The Chronicles Of Narnia: The Lion, the Witch & the Wardrobe

stays true to the story as do the next two movies in the film series.

Watch the FREE Trailer:  The Lion, the Witch and the Wardrobe

A fun read about magic and making friends, Matilda (book) was nicely remade into a movie (Matilda

) by the same name. Although Matilda’s parents aren’t very nice to her, she finds some wonderful adults who become her new family.

If you grew up in the 80’s, I’m sure you recognize this one!  But did you read the book?  The Neverending Story

introduces kids to an imaginative world that was loved by their parents.  And The NeverEnding Story (movie)

may look a little dated but is still one amazing tale!

has a really sad part to it but that’s what makes it such an extraordinary story.  Lots of discussion will come from this and it’s best read when kids are at a “coming of age” time (probably around 10 or 11 years old).  And the movie  Bridge To Terabithia

brings the book to life in a stunning way!

Inkheart is the first in a trilogy and a unique story about the power of books.  The movie

is probably more suited for older kids with all the twists, turns and dark themes.

is the perfect ‘fairy tale-like’ story for older kids.  The movie  Ella Enchanted

is actually a musical with a supurb soundtrack and enjoyed by kids of all ages (and their parents too)!

includes a cool map, short chapters and is a quick read!  My only dissapointment is that they have changed the book cover to look like the movie cover (the original artwork was much better if you can find an older version).  And the movie Nim’s Island

is all about being brave, trusting others and having a great imagination!  Both also have a part 2!

which is an environmental novel about burrowing owls.  We really enjoyed both the book & the film (I actually wish they would make more of Hiaason’s books into movies!)  The movie Hoot (movie)

is a fun tween film for kids who are inspired to save the world!

Grab a copy of the FREE Kids Books made into Movies discussion guide too!

The guide can be used with ANY book-to-movie combination.

It’s a great way to inspire kids to read the book first and also practice critical analysis, summarizing and discussion skills with their favorite films! 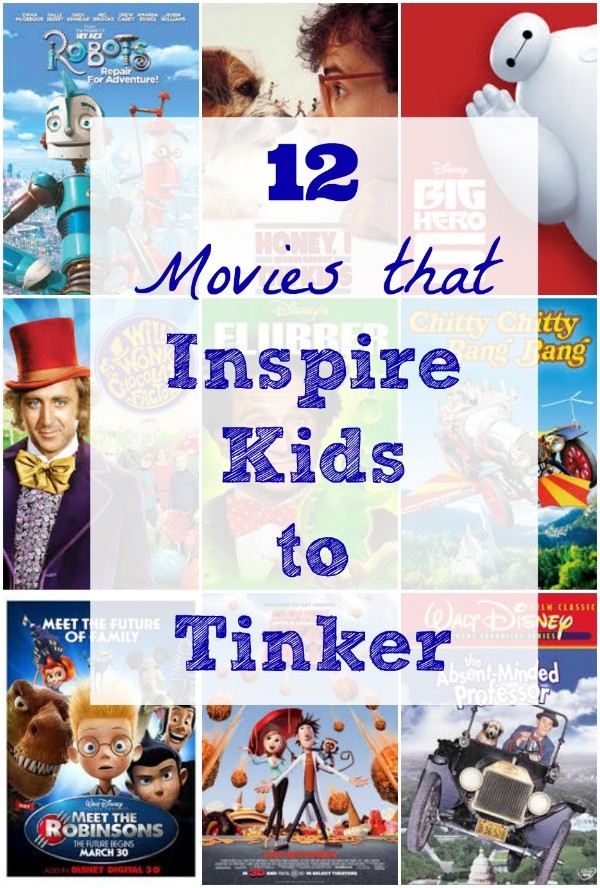